From No Supper to 3 Meals

Last Wednesday I had no idea what we would have for supper. I reviewed what was in the freezer and what was in the pantry, and I came up with absolutely nothing. I finally decided it would be pancakes.

Then it occurred to me that I had a doctor’s appointment in the afternoon, and that I could swing by the grocery store on the way home. I took a quick look at the store’s advertisement. Nothing really appealed to me or made a suggestion. But then I saw Marie Callender’s pot pies in the frozen foods ad section. That clinched it. Pot pies for supper.

Stopping at the grocery store after the appointment, I headed straight for the frozen food aisles. But in doing so, I had to walk past the checkout area. There, on a display, were deli-baked whole chickens. Those chickens are usually in the deli area, seldom at the front of the store. It seemed to be an omen. So I quickly revised our supper menu and picked up a roasted chicken. I also grabbed a couple pot pies for a later meal.

We ate half the chicken for supper Wednesday night. Along with mashed potatoes and frozen vegetables. Of the other half of the chicken, I saved a leg and a few chunks of breast for a lunch meal for me. And the remaining chicken became a Mexican soup for Thursday’s supper. Also Friday’s supper and a couple lunches.

I went from having no idea what was for supper to having 3+ suppers planned pretty quickly when I impulse-buyed the deli rotisserie chicken. 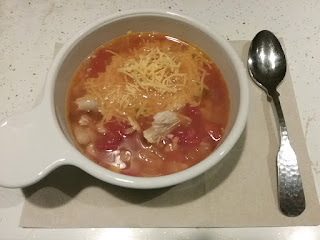 Stir in green onions and cilantro. Serve topped with cheese.

Note: Add one can RO-TEL diced tomatoes with chilies.

“That’s Mrs. Potter. She always goes on the right side of my desk. Five sisters and not a bum in the bunch.” 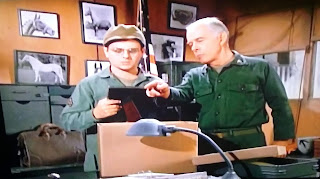 “I never start the day without throwing Mrs. Potter a salute.” 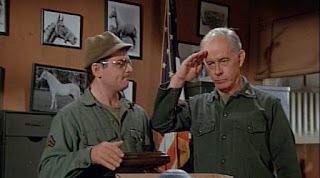 Nacky
Illinois
A baby-boomer, I've lived in east Central Illinois all my life and I find the flat-lands, especially when there are no crops and you can see away off in the distance, very reassuring. It's as if to say "This is home."